Take a trip and Visit Lake Okoboji!  Iowa gets a bad wrap when it comes to boating. Sandwiched between two big boating states, it’s easy to see how people view Iowa as the middle child of Midwest water fun. However, a few particularly fun lake and river communities offer a variety of aquatic options for the Hawkeye State. The most popular of these communities is undoubtedly Lake Okoboji, a quaint lake that surrounds Spirit Lake, Iowa. It’s a haven for Iowa boaters and those who like to have fun. Okoboji is a picture-card worthy location that thrives on a culture of relaxation, entertainment and great food. By all accounts, it’s somewhat of a hidden gem to those who aren’t familiar with the area, but it’s totally worth discovering. Better yet, it’s an incredibly popular spot for Crownline boats.

Not Just for Boating!

One of Lake Okoboji’s biggest attraction is Arnold’s Park, a classic lakefront amusement park that perfectly captures the youthful spirit of summer. The park flows with a lovely sense of adventure and nostalgia that’s certain to enamor any visitor. Maybe, it’s the giant wooden roller coaster or the giant go-kart track that create and evoke some of the fondest memories of childhood? But, it’s more likely to be the sense of community and fun surrounding the cultural hub of the lake. Take in movies and concerts with your neighbors and boating buddies after a day on the water, launch off from the park’s pier, or share a meal with your friends and family. Arnold’s Park just feels like home, no matter how far away you actually live.

Beyond the park Okoboji is an awesome spot to stop for good food. From fine dining establishments, like Minerva’s,  to funky diners, such as O’Farrell Sisters, the range of food available along the lake is actually shocking. Spirit Lake and the towns of Okoboji and West Okoboji only have a collective population of around 7,000 people. So for it to have a large number of restaurants readily available to any boat is pretty incredible. We don’t need to pick a favorite meal from all these restaurants, but it would be irresponsible not to mention how great The Okoboji Store’s walleye sandwich is. It holds up as one of the best in the nation. Oh, and the lake is home to two awesome microbreweries. Check out West O Beer and Okoboji Brewing company when you’re in the area. 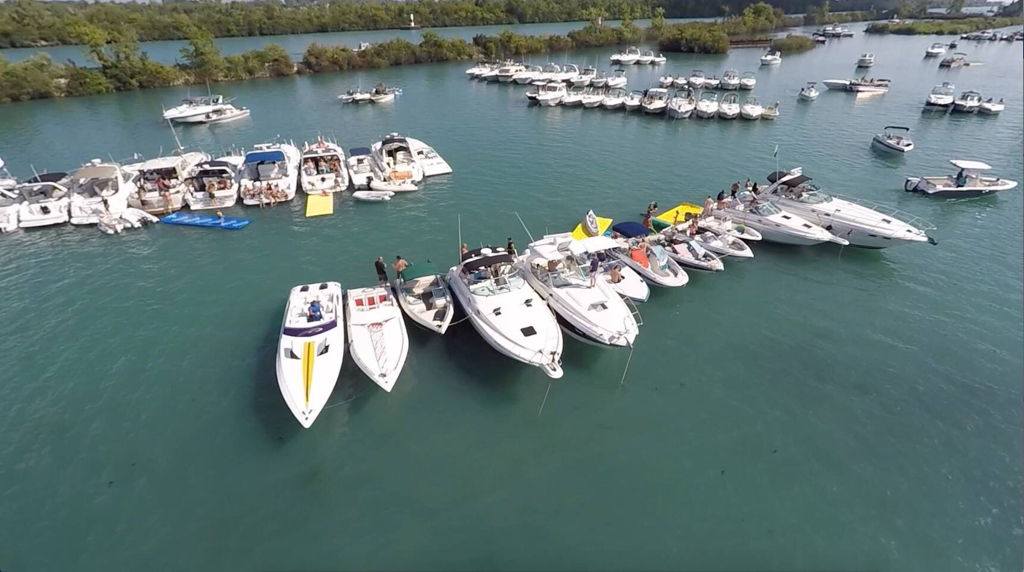 It’s the Home of the Crowndezvous!

Another great draw to Lake Okoboji is the large community of Crownline owners in the area. Parks Marina is one of the top Crownline dealers in the nation, and has established one of the best Crownline communities in the world. Recently Parks Marina hosted the annual Crownline Rendezvous, a weekend long event focused on helping the community and having a great time on a Crownline. According to the Dickinson County News, this year the event attracted 600 people and raised money for the local humane society, which brought a bunch of their adoptable pets to the event for people to pet and play with.

Make plans to attend the annual CROWNLINE RENDEZVOUS! Hosted by Parks marina in June each year.

Lake Okoboji is certainly one of the most fun lakes in the Midwest. From friendly people, amazing amusement parks, tasty restaurants and plenty of Crownline boats, it certainly is a place you should get to as fast as you can.

The strategically placed weight and the flexibility of three separate bags will allow each rider to customize their ride and dramatically increase the height and length of their wave. #WakeSurf #Crownline pic.twitter.com/L0YqZiarPU